An annual survey by the Employee Ownership Association (EOA) has revealed the UK’s top 50 employee-owned businesses – and explores the role employee ownership can play in building a ‘better Britain’. Following...

By Rebecca Harvey
Employee-owners at the TTPGroup

An annual survey by the Employee Ownership Association (EOA) has revealed the UK’s top 50 employee-owned businesses – and explores the role employee ownership can play in building a ‘better Britain’.

Following her election, new prime minister Theresa May called for social and economic reform, and highlighted her intention to tackle Britain’s ‘longstanding productivity problem’. The EOA says employee-owned businesses are already leading the way in this, while playing a vital social role.

The EOA Top 50, launched in conjunction with employee share scheme specialists the RM2 Partnership, analyses the business performance of the UK’s 50 largest EO organisations, to chart the sector’s year-on-year progress and support the sector’s move into the business mainstream. The organisations are ranked by the number of employees, with data around revenue and the percentage of the business that is employee-owned also published

Now in its third year, the top three positions continue to be held by the John Lewis Partnership (92,100 employee-owners), Mott MacDonald (15,531) and Arup (12,143). However the 2016 Top 50 also sees five new entrants to the list: Agilisys, Locala, Alfa Leisureplex Group, The Nuttall Group and Leading Lives.

According to Deb Oxley, CEO of the EOA, employee-owned businesses invest heavily in employee engagement, engendering a culture of collective responsibility by involving staff in decision making, giving them a powerful voice and sharing success more widely.

“The public’s appetite for change has never been greater, and there is a call for a fairer, more transparent and more inclusive way of doing business,” she said. “Employee-owned organisations are perfectly placed, not only to deal with the new demands of society’s expectations of business, but to utilise this for competitive, community and business benefit.

“Employee ownership recognises that the foundations of success are rooted in people and businesses in this sector demonstrate their commitment to rewarding the contribution staff make to a company’s success by offering all employees a real stake in the company’s future.”

Most employee-owned businesses operate reward schemes, which balance the executive pay gap and many have embedded employee representation at board level. 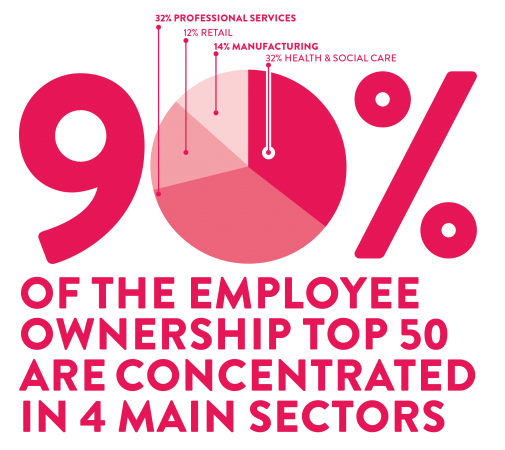 “Businesses with a level of employee ownership are not at the mercy of what can be a very unpredictable and precarious market. Instead, they are able to remain positively and passionately independent, safeguarding not only their financial assets, but also the values on which the company has been founded,” she said.

“At a time when many people are looking for a better way to do business, employee ownership meets the demand for a fairer and more economically balanced economy.

“Having already received significant government support and with its ability to fulfil the ambitions highlighted in Theresa May’s inaugural speech as prime minister, employee ownership can rightly be viewed as an essential ingredient for restoring faith in business, reconnecting the country and supporting the development of a new economy.”