A guide published by Ethical Consumer has investigated how financial institutions are approaching clean energy investments, and how thinking around the subject is shifting. Banking, ethical investments, pensions, and mortgages...

A guide published by Ethical Consumer has investigated how financial institutions are approaching clean energy investments, and how thinking around the subject is shifting. Banking, ethical investments, pensions, and mortgages and cash ISAs are ranked in the guide, which aims to help people make decisions about taking money “out of the fossil fuel industry”.

Banks and investment funds are rated on key issues such as tax avoidance and fossil fuel investments. Ethical Consumer says that while there is a “long way to go” before significant widespread change in the finance sector, there are a number of institutions that do offer sound ethical alternatives. 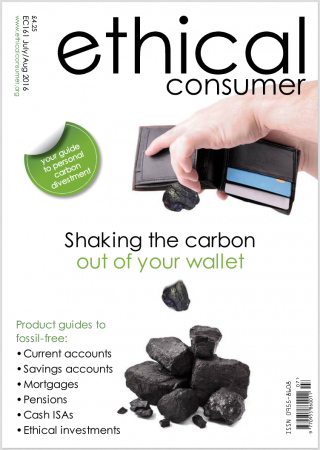 The report, which also includes a guide to credit unions and an update from the Save Our [Co-operative] Bank campaign, adds that despite there being more than 100 ‘ethical funds’ on the UK market, “very few of them have yet embraced the idea of carbon divestment”.

“Most people in Britain do not directly own shares, but almost all of us have bank accounts and around half of us have pension funds investing in shares on our behalf,” says Rob Harrison, Ethical Consumer researcher.

“A significant amount of finance for new fossil fuel extraction comes from the UK finance sector, and campaigners around the world are beginning to measure and compare involvement and to name and shame the worst offenders.

“This means that we can now see where the best options are for carbon-free banking and investments.”

The guide forms the basis of Ethical Consumer’s new campaign that focuses on encouraging people to switch current accounts, savings accounts, cash ISAs and investment funds away from companies still funding fossil fuel projects. Of the innovative institutions actively working in the transition away from a fossil-fuel economy, Ecology Building Society, the Charity Bank and Triodos Bank consistently come out on top, with the Co-operative Bank and credit unions also mentioned favourably.

Triodos has ethical investment policies that support low-carbon initiatives. It offers financial services to a range of projects including organic food and farming businesses, renewable energy enterprises, recycling companies and nature conservation projects. The Charity Bank also has ethical investment policies, and publicly discloses its investments in an annual ‘loan portfolio report’ which, in 2015, included a couple of renewable energy projects.

Ecology focuses its lending on projects that offer the greatest gains in terms of carbon reductions and environmental impact, with its ethical lending policy prioritising sustainable housing practices, sustainable lifestyles, sustainable economic activity, and other ecologically positive projects and ventures.