Opinion: Can the Co-op do more to help a lonely world?

The Co-operative Group’s two-year investment in actions to address member concerns about loneliness and social isolation has three current elements. Fundraising – with the funds going to British...

The Co-operative Group’s two-year investment in actions to address member concerns about loneliness and social isolation has three current elements.

Fundraising – with the funds going to British Red Cross (BRC) to support their volunteers who will, for example, seek to engage with lonely and isolated people

Volunteering – with Group colleagues being encouraged to take part in activities which, for example, raise funds for BRC or may assist with the campaign work itself.

However, there are elements to this plan that are missing. How can we begin to change a perception that the Co-op is considered as just another retailer milch cow?

One missing element is indication of how the Group’s charitable campaigning has co-operative relevance to core businesses.

It is not, for example, clear how Co-op Group Food stores have any relevance to the action programme other than fundraising. Food stores are a place of interaction for many people within a local community, including lonely people. The stores have the potential to offer an environment to facilitate connection with lonely and isolated customers, using the good offices of colleagues, BRC volunteers and members.

There is also the issue of the campaign’s relevance to co-operation. The Group’s charitable partnership with the British Red Cross could also play an ambassadorial role for the benefits of co-operation. A key identity of co-operatives is voluntary association. Their ethos of working together to meet common needs offers a natural counterbalance to some of the causes of loneliness and social isolation.

Through the values of ‘social responsibility and caring for others’, the campaign illustrates one of the benefits of co-operation and is an easily identifiable example of the social values of the Group in action.

I believe these missing elements (business relevance and co-operative relevance) could be expressed through themed activities.

One food-based approach to building community is slowly becoming a global movement. It started in America as Detroit Soup, whose idea of community-based funding and development programmes has recently popped up in Liverpool, Llandrindod, Rochdale, and more.

The Soup concept is simple: people gather at a community venue, pay about £3 at the door, and listen to three or four community groups pitch an idea to improve or develop the local area – whether that’s litter picking, buying plants for a community space or holding a community event. Pitchers talk for around five minutes, then get another five minutes to answer questions. With the presentations over, soup is served and people mull over the ideas. The pitches are democratically voted on, the winning group receives the pot, and at the next Soup meeting report back on how the project went. 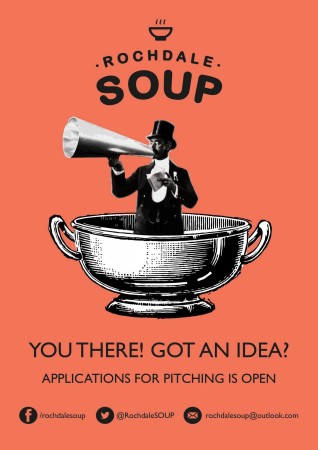 “The aim is to create a community hub for Rochdale and encourage co-operation within the community. It’s about networking and co-operating to help achieve each other’s ideas. It’s a way of taking ownership of the regeneration of the area.”

The Rochdale Soup event was supported by the local Co-operative Forum, and the Co-op Food store on Rooley Moor Road, Rochdale, who supplied a voucher to purchase refreshments for the event. It would be possible for other local Co-op Food stores to work in partnership with BRC and other community groups to organise a MyTown Soup event (or a variation on this theme), with the “soup” provided by the Co-op store either as a donation or at basic cost-recovery price.

The Co-op stores could also offer support to the groups giving the pitches, most obviously through selected member pioneers and community champions. Other relevant activities could be pursued, such as identifying whether attendees would like to sign up to a “help your neighbour with their shopping” scheme.

The potential is endless, but the great merit of the idea is that it links real-world community building with co-operative principles, and vice versa, and it can be maintained as a regular social event for as long as people value it, rather than being a one-off fund-raising event or time-limited campaign.

The food-related idea, above, is itself inclusive of co-operative values, but it would also be good to see the Group’s two-year investment seeding other co-operative solutions to loneliness without them necessarily having business relevance.

The Men’s Sheds movement, for example, is all about isolated people, perhaps bereaved and retired, coming together to make things with tools in a shared workshop. The scope for variations on this idea is again endless, and often it just takes a small amount of seed money to get the idea up and running, working alongside a mutual support network.

What if the Group established a small grants scheme which appropriated sub-regional committees, perhaps including BRC representatives, to dispense to the best ideas? A key requirement could be that the idea expressed co-operative values and principles. In this way, the Group would not only be giving communities money, which will soon be spent, but giving communities the tools of self-help and collective endeavour that can last 100 years.

At a time of substantial change, when alternative sources of money are in decline, this would be a modern application of co-op principles, benefiting the many, not the few.

David Smith is the secretary of Co-operatives and Mutuals Wales.