The Big Debate: what’s next for women in the co-operative movement?

While big businesses continue to have poor representation of women at the top, co-operatives are looking at ways to address issues raised by women in the movement. In a...

While big businesses continue to have poor representation of women at the top, co-operatives are looking at ways to address issues raised by women in the movement.

Joining the discussion, Natalie Bradbury, information coordinator at the College, talked about her experience interviewing 19 women co-operators. The interviews were commissioned by Co-operatives UK to revisit the Co-operative Women’s Challenge that was launched in 2011. Extracts from the interviews are available here.

Respondents included women at all kind of stages of their career, including those just starting out. Ms Bradbury said the interviews showed that women identified with co-operative values.

But how do co-operatives compare to other companies? Shaherazad Umbreen, head of customer and marketing at the Central England Co-operative, was another panelist. Having worked for a number of large companies, she thinks co-ops help empower women through the one member, one vote rule. Co-operatives are “the only place I feel we can talk more about inclusivity and solidarity”, she said.

Panelist Britta Werner, worker member at Unicorn Grocery and vice-chair at Co-operatives UK, said that in terms of recruitment Unicorn was already attracting a lot of female candidates.

“When you join Unicorn you have to be able to do different tasks – but how you get there is our job. It’s our job to train you if we feel you are a good co-operator,” she said.

“Everyone gets equal opportunities, that’s very important for us.” 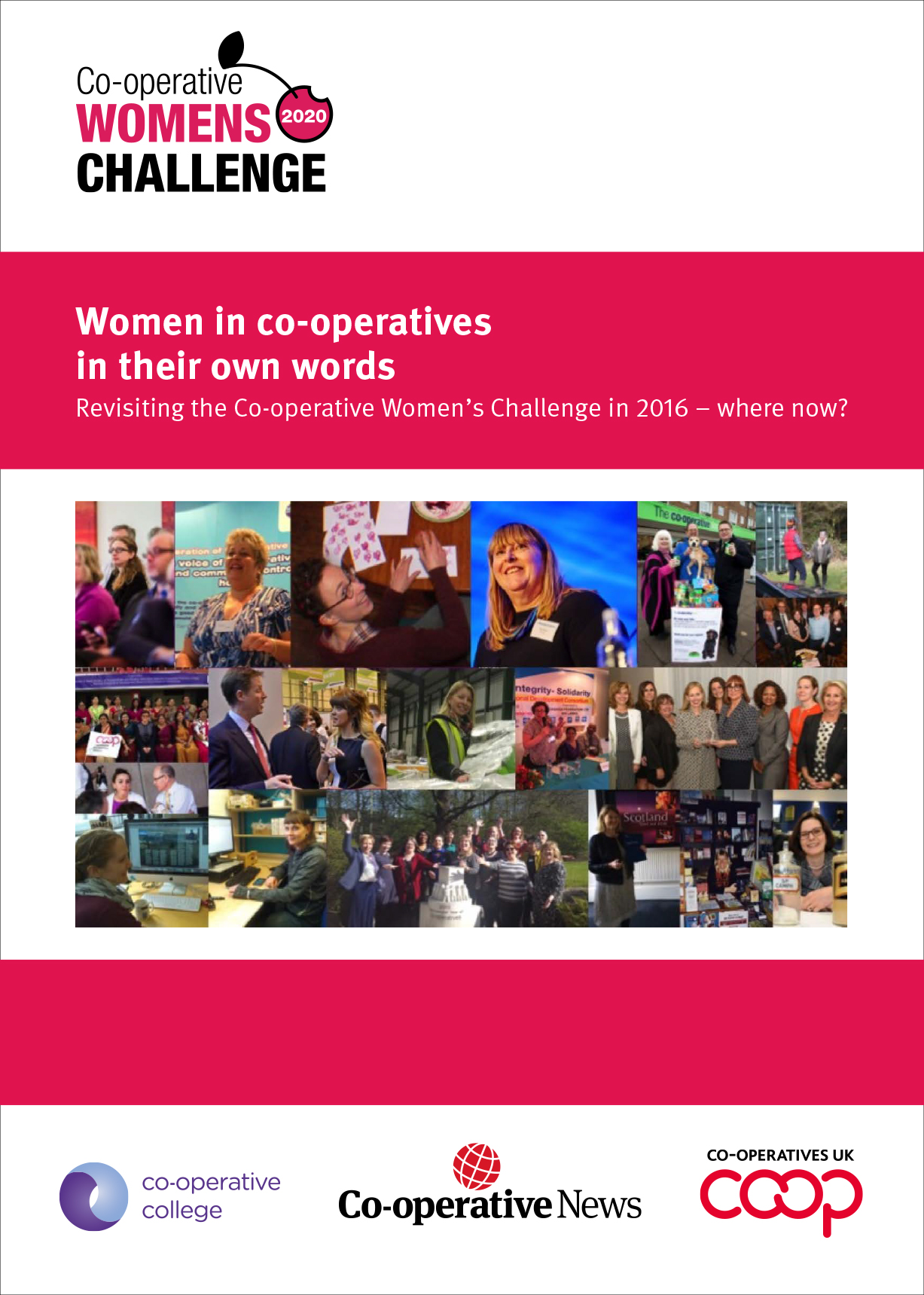 Asked whether the issues around equality varied depending on a co-operative’s type or sector, Natalie Bradbury said worker co-operatives are very different from big retail co-operatives.

“I found it really inspiring when speaking to women at worker co-ops such as Unicorn, Suma and News from Nowhere, and Radical Routes [a network of housing and worker co-ops and social centres],” she said. “They were doing so much in terms of putting into place actions that could support equality and development and help women to step up.”

According to Sally Chicken, president of the East of England Co-operative, a key concern for working women is flexibility. At her co-op, all jobs can be flexible to enable more people to apply. She said this this was not a biased approach, but rather an attempt to remove hidden and unconscious bias.

Ms Werner, who specialises in HR agreed, saying many job descriptions start out by stating a position is full-time, which prevents many women from applying. Another problem, she said, was an “overtime culture” prevailing in most businesses.

“A lot of career women can’t have children because of a culture of overtime. You have to make sure that women get opportunities,” she added.

“It’s about the salary as well, the pay gap – we need to address that, looking at what’s the value of the employee. A lot of women will have a gap in their CV looking after their family, and sometimes is not taken into account. It starts with the HR.

“An organisation like Unicorn attracts a lot of feminist men, it’s normal to have paternity leave. Equality helps men as well.”

Ms Umbreen explained how Central England is also working to enable flexible working. The society is trying to support not only women, but also men, in working flexible hours. By allowing men to spend more time at home they are also indirectly supporting women, she said. “We make sure we pay fairly and competitively, and we make sure we continue to improve.”

The progress made in terms of equality at Central England is monitored by the head of the HR department. “If you look at the pay gap, it has to do with the lack of women in senior leadership roles – we can increase that with flexible working hours,” she said.

In addition to her role at Central England, Ms Umbreen runs her own shoe business, where she is trying to apply some of the co-operative principles to address gender equality. “When a woman buys a pair of these shoes, the profit from that goes to another woman in poverty to gain education,” she said.

Last year the business helped to support 250 women through this programme.

Natalie Bradbury warned that co-operatives can be complacent when it comes to monitoring and working towards gender equality. “Because of their nature, co-ops are assumed to be completely equal – but that isn’t always the case.”

After hearing from the panelists, participants split into groups to discuss their own experiences and explore what should be done to increase equality.

Ieva Padagaite from Blake House Film Co-op shared her her experience of working behind a camera.”Filming people, looking through a lens, I can see how women – including women in the co-op movement – are silenced in conversation, they are talked over, then they get bored and start looking at their phones, start looking for other conversations,” she said.

“The co-op movement is quite inclusive and has a good heart but we need to notice when we silence ourselves, even by not paying attention. We need to tell more successful stories of women in co-ops, to encourage more women and inspire them.”

Bernadette Connor, board member of the Midcounties Co-operative, said education is key to addressing the issue of inequality.

“We should be teaching the younger generation to understand women are equal. There are no barriers for women and men, we should come away from the ‘old boys syndrome’.

“We need to come away from stereotypes, and from women stereotyping themselves as well.”

Dame Pauline Green, former president of the International Co-operative Alliance, said that co-operative values and principles demand equality. They encourage grassroots women in the movement to put pressure on leaders, she said, and to demand a role for themselves in growing opportunities.

“Mentoring is a great way forward, we should not forget the value of mentorship,” she added.

Jenny de Villiers, member of the senate of the Co-operative Group, said women needed to be more proactive in supporting each other on a daily basis.

“In everyday behaviour we have to encourage, inspire and support each other and be free to do that,” she said. “The movement has some work to do in that respect.”

The Group has recently set up a Co-op Way Policy Committee that will examine over 50 policies to ensure that they conform to the co-operative values and principles. The committee is reviewing every policy operated by the Group, from ethical trade and human rights to health and safety, colleague wellbeing, business ethics and behaviours.

Jane Avery, a director at Central England, highlighted how past projects – such as the Co-operative Women’s Link-Up – could be worth revisiting. The project was an initiative from ICOM (the Industrial Common Ownership Movement, which merged with the Co-operative Union in 2001 to form Co-operatives UK), that aimed to solidify and promote the influence of the women’s movement within the co-operative structure through conferences, workshops and events.

Tribute was also paid to the Co-operative Women’s Guild, which, despite having a strong history of promoting women in co-operative structures, saw numbers dwindle from over 87,000 members in the 1930s to under 800. Last October the Guild voted to dissolve as a national organisation after 132 years, while it still had “a high reputation and a proud history”.

Awareness is another important aspect to take into account, thinks Jim Watts, society secretary at Central England. “It’s important to be aware of conscious bias, and maintain that awareness, especially when it comes down to regulatory measures,” he said.

Natalie Bradbury added: “There’s also a duty to educate and share best practices for the benefit of co-ops – to share progress, successful stories and how you got somewhere.

“I think this came out a lot in our conversations about a much wider education – culturally and in society – and about educating people in the way that they see themselves.”

Summarising her group’s discussion, Celia Ashman from Leeds Bike Mill, a bike recycling and training co-operative, said one of the main problems was recognising the issue that needs to be addressed.

“Co-operatives UK could have a role in it, recognising the diversity of the problem, the absence of campaigning around it, the importance of historical legacy and what that carries with it,” she said.

The second step is to create a space for collective problem solving, sharing experiences through caucuses and meetings. Ms Ashman thinks that HR strategies or a handbook for co-ops would also be useful.

“Co-ops are essential in supporting communication among members,” she said, “but we can never do enough training for women in communication, education around democratic decision making.”