A record number of people are members of co-operatives in the UK, according to the UK Co-operative Economy 2016 report. Around 17.5 million people are now owners of the...

By Rebecca Harvey
The report shows a slight dip on last year's figures, but the co-op sector has seen a 10% increase in turnover during the last five years

A record number of people are members of co-operatives in the UK, according to the UK Co-operative Economy 2016 report.

Around 17.5 million people are now owners of the country’s 7,000 co-ops – up from 17.4 million the previous year, and showing an increase of 1.3 million over the past five years. This is equivalent to a third of the entire UK adult population being a member of a co-op.

The report, published by Co-operatives UK, also highlights how the sector supports 223,000 jobs and is worth £34bn a year to the economy, showing resilience in the midst of wider economic uncertainty. Despite a slight dip on last year’s figures, the sector has seen a £3.5bn (or 10%) increase in turnover during the last five years.

“As the UK economy picks up, we need to ensure what develops is an economy that works for everyone. The co-operative sector, which is giving people a say over their work, shops and local areas is looking strong for the future and points the way,” said Ed Mayo, secretary general of Co-operatives UK.

“The last five years have been tough for the economy as a whole, yet we have seen strong performance from the co-operative sector. Despite deeply competitive markets, the sector as a whole has remained stable.”

The UK now has 6,797 co-ops, says Co-operatives UK, which work in everything from farming to film.

“I was born in Rochdale, where the ideals of co-operative governance were first crafted, so the role of business in the community has always been an issue close to my heart. When people take a stake in businesses that matter to them, we see greater engagement, increased productivity and more innovation. Co-operatives should be incredibly proud of the work they do across the country.”

The two strongest areas of the co-operative movement are retail and agriculture, says the report. Co-operative retailers (including the two largest co-ops, the Co-op Group and John Lewis) account for £24.3bn of the sector’s turnover, and the UK’s 600 farmer-owned co-ops, such as Arla Foods and United Oilseeds, for £5.8bn.

“Retailers have experienced a challenging couple of years with the rise of discounters like Aldi and Lidl, the shift toward convenience stores and growth of online shopping,” says the report. “Yet the co-operative sector has held up well. Distinctive market positioning, the expanding ranges of local food and focus on high street convenience stores have enabled co-op retailers to maintain market share amid significant changes. The Co-op Group, in particular, has seen a change in its fortunes this year as an improved product range and in-store experience has led to a boost in sales.”

The agricultural industry has seen mixed fortunes over the last year, but this has translated to overall growth for agri-co-ops. “Many – though not all – dairy co-operatives have taken a hit to the bottom line – but others, particularly in arable farming, have seen an upturn,” the report explains. “GrainCo, East of Scotland Growers and United Oil Seeds have all enjoyed standout years, with the latter growing by a third and now turning over £165m a year.”

The largest co-operative in the UK by turnover is dairy co-operative Arla Foods, and there are still four agri-co-ops in the top 10.

The energy sector has also had some turbulent times, with community-owned green energy becoming “a thriving part of the co-operative sector,” despite an “uncertain environment caused by regularly changing government policy”.

“Uncertainty around community energy was compounded at the end of 2015 with a government U-turn, removing tax incentives for investors after committing to them in the Budget earlier in the year,” says the report. “The full impact is yet to be seen, but from January to June 2016, 75% fewer energy co-ops were registered than in the same period in 2015. This is unlikely to be a permanent trend, but highlights the impact of regulation being in flux.” 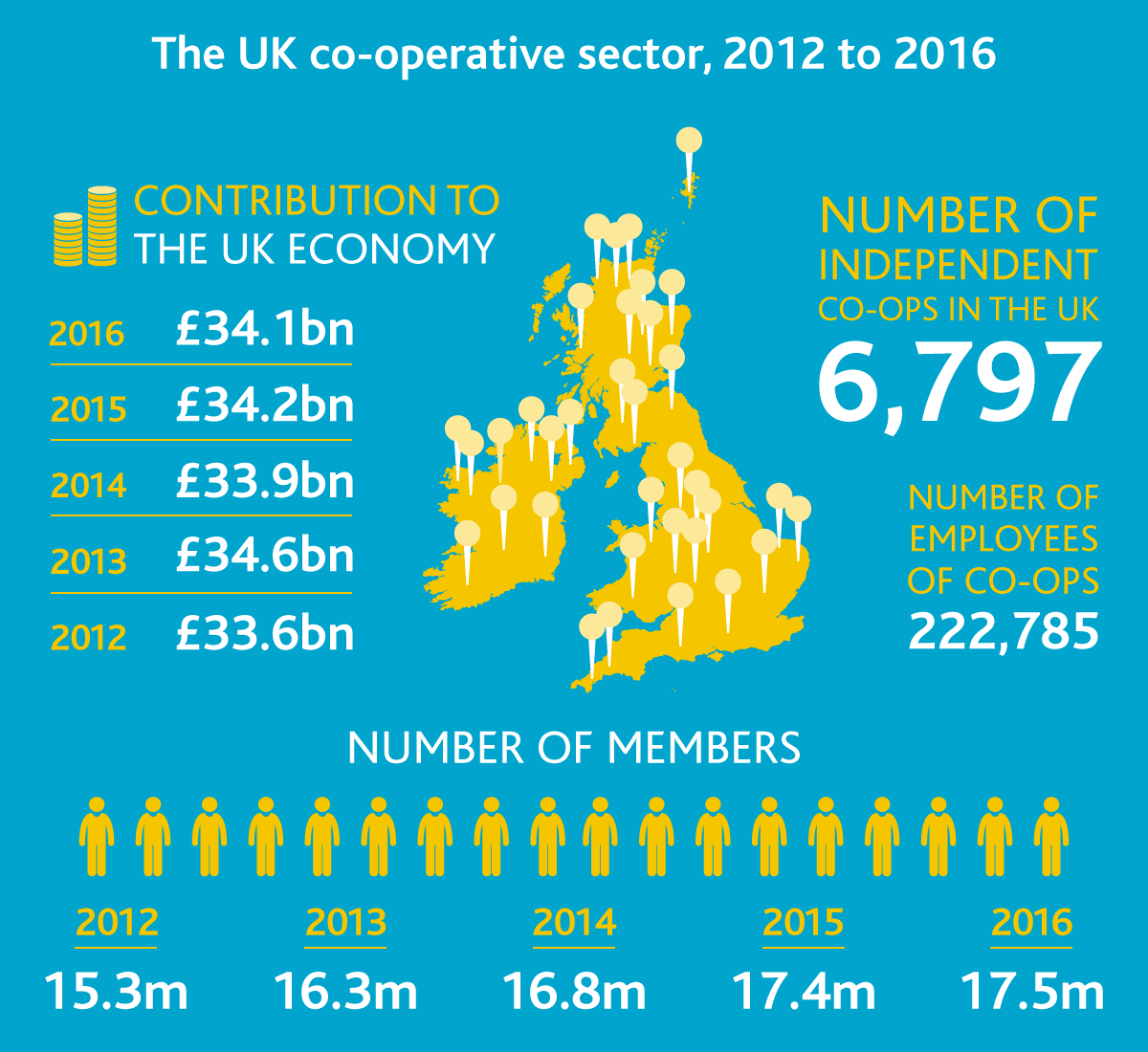 In a YouGov poll commissioned by Co-operatives UK in February, 68% of workers wanted more influence at work and 62% of respondents thought they lacked influence over the businesses they use. This public desire for empowerment is paralleled in the report’s figures around membership. Overall, the report shows an upsurge in members over the last half decade – 14.3% over the last five years – which “stems from the rise in the number of people joining high street retailers and credit unions, as well as the growth of community-owned organisations”.

“Over the last five years community ownership has rocketed,” the report adds. “A combination of government support for community rights and a growing body of financial assistance and business support means that more and more communities are taking charge, whether it’s assets like community buildings or services like libraries.”

How can we create a new economy, one directed by all of us, one that works for everyone?

Membership numbers are also set to benefit from the Co-operative Group’s plan to add one million new members over the next five years, which was announced at the organisation’s AGM in May.

“In a time of austerity, as we wait for a rebalanced economy, stable jobs and sustainable growth, it can be hard to think big. To ask: ‘what if…?'” says Ed Mayo

“Yet the question has never been more important. We may be through the worst of the financial crash, but the issue now is, surely, how can we create a new economy, one directed by all of us, one that works for everyone?