Perfect pitch: get your idea heard – and funded – at Congress 2016

As part of a programme to develop and grow the co-op sector, eight co-operatives at Congress 2016 will have the opportunity to pitch for up to £16,000 worth of...

By Rebecca Harvey
Proposals can be submitted online until midnight on 6 June. The eight shortlisted will present their pitch at Congress on Saturday 18 June

As part of a programme to develop and grow the co-op sector, eight co-operatives at Congress 2016 will have the opportunity to pitch for up to £16,000 worth of funding.

During the event, which is organised by Co-operatives UK and takes place in Wakefield on 17-18 June, there will be two sessions of Dragons’ Den-style pitches. New and existing co-operatives will be able to present proposals to an audience, which will include people from across the sector, and a three-strong pitch panel, who will be offering investment (financial and time) if they consider pitches to be good enough.

The pitch panel comprises Darrin Nightingale, from Unity Trust Bank; Vivian Woodell, chief executive of the Phone Co-op; and Ian Rothwell, from finance experts Co-operative and Community Finance. The final investment results will be announced at the end of the day.

“The Phone Co-op prides itself on supporting new co-operatives, like our investment in student housing,” said Mr Woodell. “We have a Co-operative Development Fund and an indicative budget of £10,000 we would be willing to invest in innovative and commercially viable co-operatives. I’m looking forward to hearing your pitches.” 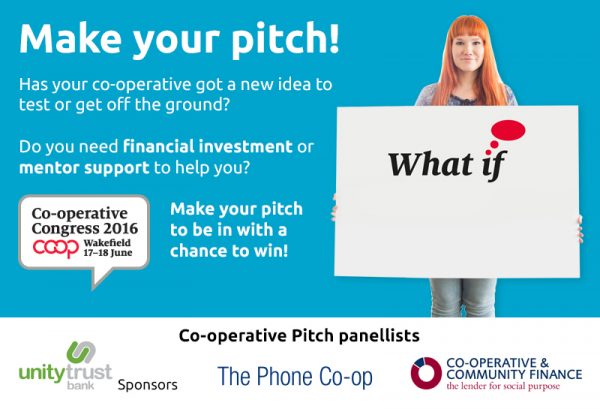 Unity Trust Bank, which is sponsoring the pitch sessions, is offering up to £6,000 in funding. “The co-operative sector is bursting with new ideas and, at Unity Trust Bank, we’re actively working to support organisations that create community, social or environmental benefit,” said Unity’s Darrin Nightingale.

“We’re also a long-term supporter of Co-operative Congress so we’re pleased to be involved with this year’s event by providing financial support of up to £3,000 for the strongest of pitches in both sessions.”

Ian Rothwell is also excited about the event. “Over the last 40 years Co-operative and Community Finance (CCF) has provided fair and flexible loan finance to hundreds of co-ops and community businesses across the UK,” he said. “We offer loans between £10,000 and £150,000 for a wide range of business activity. I’m very much looking forward to hearing the pitches and giving our support.” CCF will offer support to help co-operatives get ‘investment ready’ and, if they make a good business case, they can later apply for a loan from CCF.

Proposals can be submitted online until midnight on 6 June, with the shortlist decided shortly after. As well as coming up with an initial idea, proposals need to be able to explain how the idea will work, why it is important and how it can be a success. How will the funding be used and what will the outcome be?

“Co-operative Pitches is new idea for Congress and a great opportunity for existing co-operators to support the next wave of co-ops,” said John Atherton, membership manager at Co-operatives UK.

“Unity Trust Bank and the Phone Co-op will be there in particular to financially support great pitches they hear, but anyone in the audience can offer to mentor or support pitches they think are worthwhile.”