Why is there a need for Responsible Business week? Because somewhere along the way, businesses became irresponsible as the drive for profit that benefits a few increased while answerability decreased....

Why is there a need for Responsible Business week? Because somewhere along the way, businesses became irresponsible as the drive for profit that benefits a few increased while answerability decreased. But co-operatives’ inherent accountability – their responsibility – to members, make them the ultimate responsible business structure.

Now in its fourth year, Responsible Business Week (18-22 April), organised by Business in the Community, is described as the awareness week for responsible business, and claims to give a “high profile opportunity for businesses and organisations of all sorts to demonstrate the many ways that they can work together to turn ambition into positive action for a fairer society and a more sustainable future”.

And principle seven, concern for community, explains how co-operatives work for the sustainable – and responsible – development of their communities.

To coincide with the week, Central England Co-operative is donating two heavy goods vehicles to budding mechanics in its region. The two vehicles, which previously made deliveries to society food stores, will get a second lease of life when they become training vehicles for students on the HGV Maintenance and Repair course at Stephenson College in Leicestershire, allowing them to get hands-on practical experience.

“As a responsible business we put a large emphasis on making a positive contribution to the communities in which we trade,” says Robin Farrell, head of distribution and logistics at Central England. “We’re delighted to hand over these two vehicles to the College, especially since it coincides with Responsible Business Week, which aims to highlight the role that organisations like ours play in giving something back to society.”

The society has previously donated HGV vehicles to Transaid for use as training vehicles in Africa, where road safety is a major issue.

At the Co-operative Group, there is a planned return to campaigning, and it will be “exploring and developing new ways of engaging with our members and communities” over the coming year.

“As a national business with a presence in thousands of communities throughout the UK, we’re well placed to influence change on issues that matter to our members at both a local and national level,” says the Group in its annual report. “Campaigning in this way helps to define and differentiate us, and we’re probably one of the very few businesses that articulates such a commitment in its Purpose.”

It adds: “We’re continuing to develop our ecological and social responsibility policies and practices, in line with our Sustainable Development Policy.”

Read all our coverage of Responsible Business Week 2016

One of the Group’s most recent high-profile community campaigns has been its continuing commitment to its charity of the year.

“Over 30,000 members and colleagues shared ideas to identify potential themes that were important to tackle and that resonated with our Purpose,” says the Group. “In 2015, almost 80,000 of our members and colleagues voted on the issue, on which we would work with a charity partner to fundraise and campaign – our largest ever engagement around a charity vote.

“They chose to tackle loneliness and social isolation, working with the British Red Cross. We’ve set ourselves a target to raise at least £3.5m by January 2017. By March 2016, we’d already raised £1m.”

In Rochdale, the Pioneers Museum has been exploring responsibility to its local community through working towards setting up a SOUP event.

SOUPs are community-based funding and development programmes which collaborate and invest time and money into democratically elected local projects, and is an idea that has already taken off in places such as Detroit, Liverpool and Newcastle.At SOUP events, people share a simple meal and donate money (eg £5). Everyone then hears pitches from community groups as to how they would use the pot of money to support a creative project (eg to buy plants for community spaces, or to hold a community event).The pitches are democratically voted on, the group receives the pot, and at the next SOUP meeting report back on how the project went.

It’s about community action in response to funding being cut left, right and centre in a climate of austerity

“SOUP is about creating a space where people can connect, share ideas, resources and where new networks of support and community can flourish. The aim is to create a community hub for Rochdale and encourage co-operation within the community.” He adds: “It’s about raising awareness of local projects, about people networking and co-operating to help achieve each other’s ideas. It’s a way of taking ownership of the regeneration of the area.

“It’s about community action in response to funding being cut left, right and centre in a climate of austerity. It’s taking the co-operative values and principles of self help, self responsibility, voluntary action and member economic participation – local people funding local ideas.”

Ed Mayo: Why co-operatives are leaders in responsible business

From an initial meeting of 25 people from the local community on 31 March, the first official Rochdale SOUP event will take place on 31 May, from 6-8pm.

“This is open to the whole of Rochdale borough and we are looking for individuals, community groups and organisations with ideas to help the local community,” says Mr Diggle. “SOUPs are about gathering the community to listen to each other’s ideas, sharing a meal and taking control of Rochdale’s future.”

According to Social Enterprise UK (SEUK), social enterprises are responsible businesses because they exist to tackle social and environmental issues – they are asset-locked, mission-focused and trade to create positive change.

“Our State of Social Enterprise 2015 Report showed that they are leading the way when it comes to creating opportunities, diversity and pay,” says Charlie Wigglesworth, director of business and enterprises at SEUK. “Fifty-nine percent of social enterprises employ at least one person who is disadvantaged in the labour market, 40% are led by a woman, and the pay ratio between the highest and lowest paid members of staff at a social enterprise is 3.6:1 (compared with 150:1 at FTSE 100 companies).”

A recent survey carried out by the organisation showed that 74% of social enterprises are paying the higher Living Wage, as set by the Living Wage Foundation.

“The idea of being a ‘responsible’ business is at the heart of the social enterprise movement,” adds Mr Wigglesworth. “However we know that not every business can be a social enterprise and we value contributions made by traditional businesses to help create a fairer and more sustainable world.”

Social Enterprise UK used the opening day of Responsible Business Week to launch the Buy Social Corporate Challenge at Downing Street. The Challenge will see SEUK and the Cabinet Office support a group of high profile businesses to spend £1bn with social enterprises by 2020.

The partners already on board are Interserve, Johnson & Johnson, PwC, RBS Group, Santander, Wates, and Zurich – and the hope is to enlist more businesses, from a diverse range of industries, over the next four years. 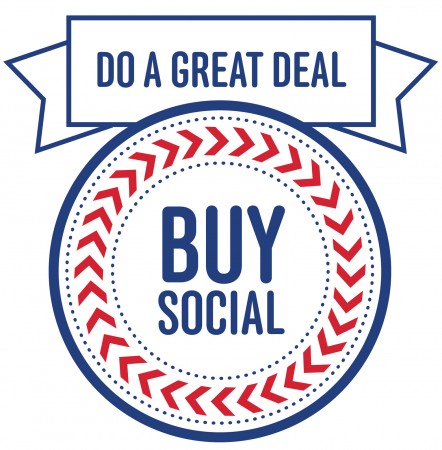 Charlie Wigglesworth believes the Buy Social Corporate Challenge is proof that big businesses want to use their purchasing power to create a positive social impact. “It shows a real willingness to go beyond traditional conceptions of CSR and build social value into the everyday operations of their businesses,” he says. “SEUK will be supporting the corporate partners through diagnostic work, training and internal and external communications. We’ll be working with partners to carry out an initial diagnostic of current spend with social enterprises, to collectively set targets, and offer ongoing guidance and support. We’ll also undertake training sessions for procurement and CSR teams, and help corporates to measure and report on their social impact. It will be an ongoing process and we’ll work with the partners as they explore how to make the ambitions of the Challenge a reality.”

Mr Wigglesworth says the corporate partners are already buying from some social enterprises in a wide variety of sectors, and that SEUK has been able to use its knowledge of the sector to facilitate contact between corporate buyers and social enterprises through events and personal meetings.

Many social enterprises are co-operatives, the Challenge will give these organisations an opportunity to sell to large corporates, raising their profile and hopefully creating new business opportunities

According to Co-operatives UK, there are nearly 7,000 independent co-operatives in the UK – while government data estimates that there are approximately 70,000 social enterprises. Pete Holbrook, chief executive at Social Enterprise UK, says the Buy Social Corporate Challenge is a big opportunity for co-operatives to create new business while raising awareness of the sector.

“Given many social enterprises are co-operatives, the Challenge will give these organisations an opportunity to sell to large corporates, raising their profile and hopefully creating new business opportunities,” he says.

“A key tool partners will be using to find suppliers is the Buy Social Directory – the UK’s largest directory of social enterprises – at www.buysocialdirectory.org.uk. Social enterprise co-operatives should make sure they are registered.”