Cross party group of MPs stand up for Fairtrade farmers

MP’s from across the political parties have launched a group aimed at standing up for the rights of Fairtrade farmers. Launched during Fairtrade Fortnight, the All Party Parliamentary...

By James Sullivan
Students from Honley High School and campaigners at the launch of the cross party group, along with Colombian banana farmer Julio Mercado Cantillo. [photo: Fairtrade Foundation]

MP’s from across the political parties have launched a group aimed at standing up for the rights of Fairtrade farmers.

Launched during Fairtrade Fortnight, the All Party Parliamentary Group (APPG) on Fairtrade was established after action from campaigners in Holmfirth, West Yorkshire.

They approached Jason McCartney, Conservative MP for Colne Valley, and Holly Lynch, Labour MP for Halifax, to see if they could do more to highlight the issues facing farmers in developing countries.

Helen Robinson, a local businesswoman and campaigner from Holme Valley Fairtrade, said: “I knew my local MPs are both committed supporters of Fairtrade in our community, which is great, but we felt they could do more on a national scale. So I’m thrilled that Jason and Holly were equally enthusiastic and will work together to get Fairtrade higher on the agenda in Parliament.”

Fairtrade Fortnight 2016: what did co-ops do? 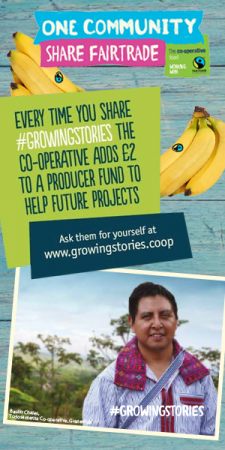 Mr Cantillo spoke of how he’d benefited from the stable prices guaranteed by Fairtrade. “When we began growing bananas, it was tough. Before Fairtrade, there were days we only had one meal a day. There wasn’t enough. Since we joined, everything has changed.”

Jason McCartney, who is co-chair of the APPG, said: “The APPG will act as a forum to promote Fairtrade here in Parliament and across the nation. I’m proud that our many supporters include local Fairtrade organisations such as Holme Valley Fairtrade from my constituency.”

The event was supported by the Co-operative Group, who provided the breakfast. The Co-op is sharing the experiences of Fairtrade farmers through its online Growing Stories project, putting customers in the UK in touch with farmers around the world.

Michael Gidney, CEO of the Fairtrade Foundation, said: “I’m delighted that the people of Holme Valley have shown that action can lead to change.

“Establishing this APPG is a huge achievement and provides an opportunity for the public, parliamentarians and businesses to work together and make a difference to the lives of farmers around the world.”