Ownership and equality in northern Syria

Ownership in a warzone is complicated idea. This is especially true in northern Syria, where internal conflict has escalated to mass movement of people, border disputes and international military...

By Rebecca Harvey
Destruction of Kobani in northern Syria

Ownership in a warzone is complicated idea. This is especially true in northern Syria, where internal conflict has escalated to mass movement of people, border disputes and international military involvement. But the Rojava region, on the border with Turkey, is taking ownership of its own situation, through co-operating to establish a society based on
the principles of direct democracy, sustainability and gender equality.

From September 2014 to January 2015, the city of Kobanê, on Syria’s northern border with Turkey, was under siege by so-called Islamic State. On 29 January 2015, Kobanê was liberated through the work of several democratic forces, including the People’s Protection Units (YPG) and Women’s Protection Units (YPJ), the International Coalition and Kurdistani forces. Three days later, the Kobanê Reconstruction Board was established, and since then the board, in co-operation
with the Kobanê canton office and the municipality has worked on a number of projects around education, health and infrastructure.

Speaking at the Ways Forward 4 conference in Manchester earlier this year, Alan Semo, a representative of the Rojava’s PYD (Democratic Union Party), told how local collectives are working together to rebuild the area. “Rojava is a true community,” he told co-operators.

“We aim to live together peacefully and co-operatively.” 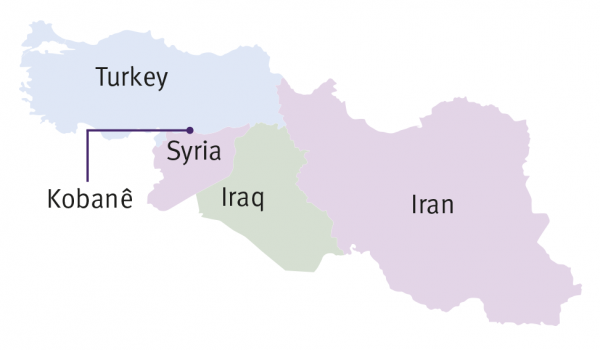 Speaking with Co-operative News in January, Hawzhin Azeez, a member of the Kobanê reconstruction board, says a co-op is seen as any project or programme that is designed to bring a group of people together with the purpose of encouraging them to become financially and economically independent and self-sufficient.

“Co-ops are seen as a great way to increase the connection and ties within society between particular groups, encourage politicisation and bring to the public sphere traditionally marginalised groups and voices such as women and girls,” she says.

“Co-ops are an integral part of the long-term development – politically, economically and socially – of the Rojava region. Self-sufficiency and independence is a one of the key pillars of the revolution, both as the people of Syria being independent from outside forces and powers but also internally by encouraging local economies and development.”

Due to the ongoing conflict, there are no government ministries operating in the region, adds Ms Azeez, Instead boards have
been created to continue to have some semblance of a government and services.

The women’s board, as well as acting as an umbrella organisation with many other women’s groups and organisations, associations and bodies under its wing, specifically aim to encourage women to gain employment; become financially independent; and learn to connect with each other and organise themselves.

The women’s board has been instrumental in implementing co-ops, says Ms Azeez, giving the example of the Amargi women’s co-operative. This consists of women making and sewing revolutionary logos, flags, and other related items, which are then sold in a special store in the market also run by women.

Another project, the Vina sewing centre, provides sewing machines to women from martyr’s families so they can become financially independent. Again, the women can sell their products in the local market and gain the financial independence, skills and capacity to run a business.

There is also a kindergarten centre, which serves about 70 children and is run by women to encourage them to be financially independent. There were also plans for an orphanage. “The plans are drawn and prepared,” says Ms Azeez, “but due to lack of finances the plan has not been implemented.”

Unfortunately, this seems to be a recurring theme. “Other ministries also have similar plans for co- operatives, but are heavily hindered by lack of financial support and capacity to implement their projects. A number of western NGOs and organisations have contacted the canton and the separate ministries but none have been followed up and there is a consistent sense of disappointment with promises made and not followed through.”

In Rojava, co-ops are seen as “an integral and important part of the bottom-up democratisation process”, says Ms Azeez, and “integral to the development of civil society groups”.

She adds: “The core objectives of co-ops is to encourage financial independence for the lowest sectors within society, to increase and encourage creativity, locally produced products, keep people within the canton by providing them with employment opportunities and prevent them from migrating.

“Fundamentally, they create and increase interconnection between different sectors and society so that they can better organise themselves.”

What do co-ops do for gender parity?
Previous

Brexit: The view from the Co-operative Party
Next
Subscribe to the newsletter