A dairy co-operative in Italy has raised six million euros (£4.7m) by issuing bonds that are guaranteed by huge wheels of Parmesan cheese. The 4 Madonne co-operative is...

By James Sullivan
One of 4 Madonne's Parmigiano Reggiano wheels, aged between 14 and 22 months, now being used as a financial guarantee on a bond

A dairy co-operative in Italy has raised six million euros (£4.7m) by issuing bonds that are guaranteed by huge wheels of Parmesan cheese.

The 4 Madonne co-operative is based near Modena in northern Italy and produces the cheese using milk from 40 dairy farms.

They sought funding from banks to help finance their push for a bigger presence in the US market, as well as a focus on longer-aged cheeses. But with Parmesan often taking two or three years to mature, they needed money to cover the staff and milk they had already put in.

However they found lenders still wary of loaning money after the 2007-8 financial crisis. 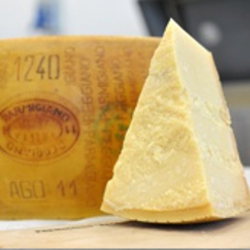 Andrea Setti, financial controller of 4 Madonne, said: “We already have some loans but, after a certain point, the banks don’t want to give you any more.”

Their way around the problem was through an innovative bond scheme authorised by the Italian government.

Investors agree to provide funding for six years, in return for a 5% yield backed by cheese assets valued at 120% of the bonds’ worth. This means the bond owners get a 5% payment every six months until January 2022. Should the co-op fail to pay, at least the bondholders have a large amount deal of maturing cheese that they can sell.

It’s not the first time banks have used maturing cheeses as a guarantee. This type of practice is already quite normal in Emilia-Romagna, also in northern Italy, where banks use climate–controlled vaults to house all the cheese they have stored as security.

The scheme is also common in whisky and wine production, where the luxury product increases in value the longer it is left to mature.

Unicorn’s Debbie Clarke: US ideas can take root on home soil
Next
Subscribe to the newsletter