Election: In a year that has been dominated politically by the lead up to – and aftermath – of the general election, Labour and Co-operative politicians have been giving a...

In a year that has been dominated politically by the lead up to – and aftermath – of the general election, Labour and Co-operative politicians have been giving a voice to the movement in Westminster.

After voters took to the polls on 5 May, 42 Labour and Co-operative hopefuls translated into 24 members of parliament, in constituencies from Swansea to Redcar, via London, Luton, Leicester and Liverpool. And these 24 later became 25, with Jim McMahon winning the Oldham byelection in December.

Although there were no Labour/ Co-op candidates running for the Labour leadership over the summer Stella Creasy, MP for Walthamstow, was one of five candidates for deputy leader, alongside Angela Eagle, Caroline Flint, Ben Bradshaw and Tom Watson.

In a debate prior to the leadership votes, Ms Creasy said she was passionate about the idea that the future of the Labour Party was aligned with the future of the Co-op Party. “Co- operatives have a crucial role to play in the wider business environment, in empowering consumers, and promoting mutual values in the financial sector,” she said.

“Our vision for 2020 must be about improving living standards, which will fall further for many in the wake of George Osborne’s Budget proposals,” wrote Jeremy Corbyn in July. “But it must also be about improving people’s control over their own lives – especially in their work and their housing.

“The co-op movement is a force for human emancipation here in the UK and around the world. I want the next Labour government in 2020 to work with you so that we are driven by co-operative principles: self-help, self-responsibility, democracy, equality, equity and solidarity.”

The Co-operative Party has had a busy year, from campaigning for projects (and its own survival) to saying goodbye to its general secretary, Karin Christiansen. 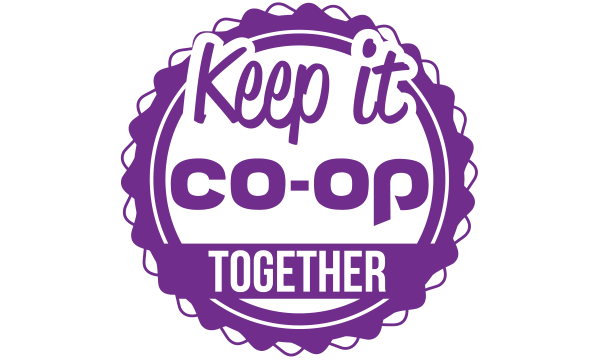 In February the Party launched its Keep It Co-op Campaign, which aimed to support the Co-operative Group’s mission to change Britain for the better, while calling on the Group to continue to financially support the Party.

This followed 2014 research released by the Group which showed that 74% of members thought it was inappropriate for big businesses to donate money to political parties. Of those members who responded, only 36% were aware the Group supported the Co-operative Party. The issue came to a head at the group’s AGM in May, where a motion put forward by members, asked for the approval of political expenditures (not to exceed £1m per annum) that support the objectives of the co-op movement. The motion was carried with 55% of the vote.

As part of its ongoing campaign strategy, the Party focused on people-powered public services, from railways to the BBC, and taking into account local councils, school and health and social care.

“Long-term sustainable savings can only be made if we rethink and reform public services while delivering standards that people need and expect,” said the Party. “The last ten years have seen significant growth in public sector mutuals. These can provide the efficiency gains of the private sector whilst providing real democratic accountability, giving users, employees and other stakeholders a real say in how their organisations are run.”

Karin Christiansen joined the Co-operative Party in 2012, becoming the Party’s first female general secretary since its foundation 98 years ago. In July, she announced she was stepping down from the role after the 2015 party conference season. “It has been a great honour to lead the Co-operative Party for the last three years,” she said, but added that it was “time to hand over to a new general secretary to develop and inspire the co-operative movement’s relationship with politics for the future.”

In October, Claire McCarthy was announced as Ms Christiansen’s successor. “There is a lot to be done – and great opportunities to seize,” she said. “Our values and principles have so much to offer and I am utterly determined that we take every opportunity to champion them.”

End of Year Review 2015: Community
Next
Subscribe to the newsletter